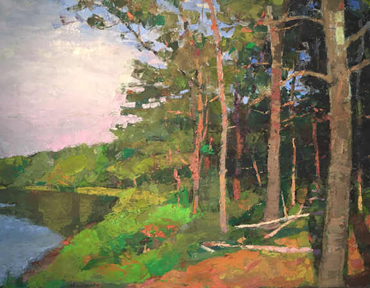 Larry Horowitz considers Joni Mitchell’s 1970 classic "Big Yellow Taxi" his anthem of sorts as an artist. With so much of the country paved and covered with buildings, the 61-year-old Wellfleet painter says he aims to showcase the beauty of the natural land in his work. "My paintings are a quiet place in a noisy world," Horowitz says. "I’ve always felt an emotional connection to the land, and I’ve always appreciated natural things."

Whether it’s the beaches of Wellfleet, the coast of California, the rural barns of Vermont, or the desert wildflowers of the Southwest, Horowitz—who has completed more than 6,000 paintings in a 40-year career—says he enjoys traveling all over the country to paint. After attending art school at the State University of New York, Purchase, Horowitz worked as an artist apprentice to painter Wolf Kahn in his native New York for six-and-a-half years—an experience he says was "tremendously influential."

"In art school, you get an idea about what being an artist is, but it’s never really put together to you in the form of doing it as a career," Horowitz says. "[Kahn’s] biggest influence on me was seeing how an acting artist lives and works, and realizing that I wanted to be that."

Horowitz—who paints both en plein air and in his studio in oil, watercolor and pastel—likens some of his best paintings to Tiffany glass. "I love the idea of a painting almost having a light behind it and having the colors in the painting act like light and brightness," he explains. Horowitz says his understanding of color nuance helps his paintings achieve their full potential. "When you get that iridescent quality in the sky, the painting takes on an otherworldly feeling."

He can spend hundreds of hours on his larger pieces, like the impressionistic "Dappled sunlight in the woods," which measures 63 x 77 inches. From working with physically demanding canvases like heavyweight linen and hemp, to using anything from a palette knife to a broom to achieve his desired texture, Horowitz says he places great value on "art and craft" in his paintings and telling "the story of the painting" through different surfaces.

"When you can see a section of a painting that’s not as heavily painted and see the actual linen and under-painting color," Horowitz says, "it gives you an idea of the journey the painting’s been on." 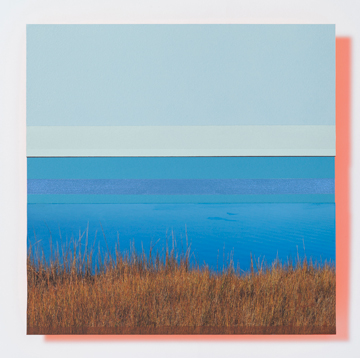 Every morning, Jane Lincoln wakes up and completes her "color calendar" - a project of her own invention where each day she selects the arrangement of colors from three hues of Sherwin-Williams paint sample cards and creates a collage of inspiration. She hasn’t missed a day since September 2014. "We don’t always have control over what’s happening with our life and our days, and this is a way for me to work in color every single day, even if I can only do this," she says.

Lincoln describes herself as a "colorist." She draws inspiration from Josef Albers and his teachings on how different colors interact with one another. "It’s still what drives me—the mystery of color," she says.

Beyond being passionate about her chosen subject, Lincoln is well educated in all things color. From self-teaching to formal education—including a two-year, low-residency program in Provincetown run through the Massachusetts College of Art and Design—she has dedicated her life to becoming a master in color and to finding different ways to share the things that excite her about this subject. "Everyone relates to color, whether they’re an artist or not. It’s very emotional. Everyone’s going to see my paintings differently," she says.

Lincoln creates color series, which often respond to one another but are also different on their own. Her most recent undertaking is called "Color Zones," a series of acrylic painted paper arranged together to create bands of color. Simply changing one’s position or proximity to the piece creates a different color relationship and reveals more subtle interactions between the bands. From cast shadows and iridescent bands to painted edges and strips of digital photography, Lincoln has set out to make her viewers think critically and look closely. "I play around with what happens with your eye," she explains. To top it all off, she paints the back of each piece with florescent colors, creating tinted shadows that radiate against the wall.

"I let people decide what they want to feel about it. It’s personal," Lincoln says about her work. She explains that her goal is for her pieces to conjure up emotions or, if not, to create new experiences for viewers. There are limitless possibilities to what she can create, the color relationships she can explore, and the takeaway that viewers can have.

Josef Albers wrote in "Interactions of Color," a work that has wholly influenced and inspired Lincoln, "In visual perception a color is almost never seen as it really is—as it physically is. This fact makes color the most relative medium in art." The ways in which Lincoln brings color to life would almost surely have made Albers proud. "I want people to look at color," she says in true Albers fashion. "I want them to think about color and look at color and realize that what they’re seeing isn’t necessarily what’s there." 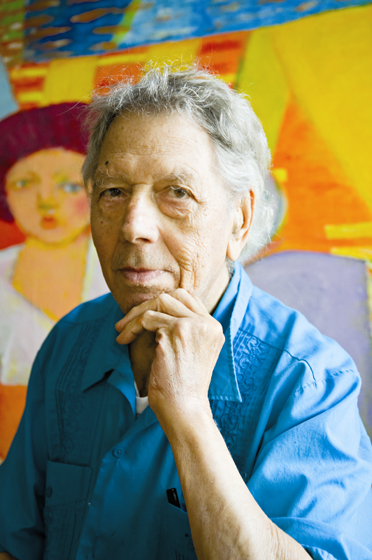 John Grillo was born July 4, 1917, the elder of three sons to Sicilian immigrant parents, in the small industrial town of Lawrence, Massachusetts. The 1930's brought the family to Hartford, Connecticut where as a child growing up his first influences were felt, since his Father painted and sculpted. John would frequent the Wadsworth Antheneum Museum in Hartford where the collection of portraits would inspire him to become a portrait painter. In 1935 he enrolled in the Hartford School of Fine Arts where he learned portrait and landscape painting. He painted the poor and the working class and in 1939 he painted a large mural depicting a family of three sitting at a dining table with no food on their plates (based possibly on a lithograph by Daumier). During this period his major interests included the "Ashcan School", Luks, Robert Henri, Thomas Hart Benton and Reginald Marsh, together with the works of the old masters.

Over the course of Grillo's distinguished career he showed in 85 one-man and over 100 important group exhibitions. His paintings are displayed in major museums, including the Metropolitan, the Guggenheim, and the Whitney Museum, as well as the Walker Art Center in Minneapolis and the Los Angeles County Museum. In 1967 he was appointed as a Professor of Fine Arts at the University of Massachusetts in Amherst, where he held a twenty-five year teaching tenure.

Cove Gallery co-director Liane Biron studied with Grillo when she attended the University of Massachusetts in Amherst, and when she and her husband, Larry, took over the gallery in 1989, one of the first things they did was ask Grillo if he would join the gallery.

Liane Biron says of Grillo, "I find it fascinating that he has always pushed the limit and never seems to tire, he just never stops. He is so vital, and that vitality comes through in his work."

Grillo evidently exhibits his passion and zest for life through his ever-changing approach to his work, never sticking to one style, medium, theme, nor canvas size. Grillo embodies a truly creative free spirit, boldly experimenting with the possibilities of paint, and fueled by an incessant energy. As Biron explains, "John is still experimenting with his work, he doesn’t want to be categorized."

Closed for the Season
Re Opening May of 2020
We will meet with customers by appointment
Please Call: 508-349-2530 Leave a message