"The Cove Gallery has become somewhat of an institution in Wellfleet", states Gillian Drake. Liane and Larry Biron purchased Cove Gallery in the late 80's and have run the business every summer since. "We came to Wellfleet on vacation one year when I was teaching in Western Mass. and Larry was finishing his Master's Degree in Springfield in Arts Management," explains Liane. "It was a rainy day and we didn't have anything else to do, so we decided to look at real estate. Greta Waldas, the owner of Cove Gallery since 1965, had just decided to put it on the market. It hadn't even been listed yet! We went to see it and just loved it! We hit it off right away with Greta."

Larry and Liane opened Cove Gallery in the summer of 1989, and quickly became known for showing work by nationally- renowned artists. The first artist they sought to represent was John Grillo, Liane's favorite teacher at UMASS and student of Hans Hoffman. John was a Rock Star in the Amherst – Northampton Valley. John agreed to come to Wellfleet exclaiming, "You guys will never sell my work!" The Cove did sell his work! In fact, he soon became a very popular, colorful artist on the Outer Cape. Leonard Baskin, a master printmaker and Larry Horowitz, plein air painter and protégé of Wolf Kahn, joined their roster of artists early on. Tomie dePaola delighted folks with children's illustrations and drew quite an audience drawing and telling stories.

Judith Shahn, an iconic New Yorker illustrator and daughter of the artist Ben Shahn, had been one of Cove Gallery's first artists. Judith Shahn had a falling out with the former owner and wasn't showing her work at the gallery anymore. Every day people would come in to see her work. Liane and Larry decided to talk to Judith, so we made contact and she insisted we meet at a place called Just Desserts, behind the Lobster Hutt in Wellfleet. She didn't want anyone to know about the meeting. Liane and Larry remember she was wearing all black, sun glasses and even a hat, very dramatic! Judith's serigraphs have become a stable at the Cove.

The Cove has become a popular art gallery on the Outer Cape. Larry and Liane still continue to seek new and exciting artists. 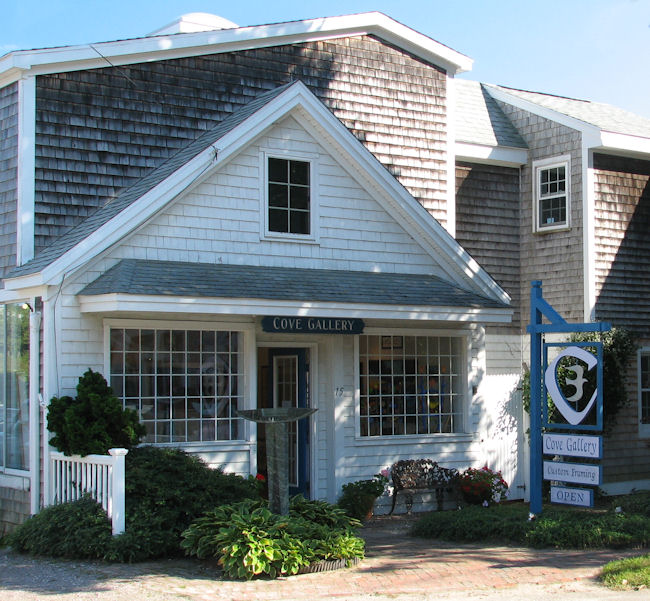 Closed for the Season
Re Opening May of 2020
We will meet with customers by appointment
Please Call: 508-349-2530 Leave a message